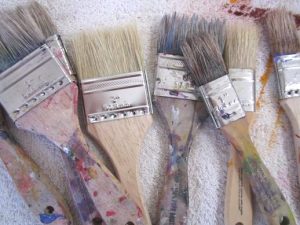 You’ve always wanted to express yourself creatively.  You decided to try intuitive painting.  You’re hoping something beautiful might somehow come out of you and become a painting.

At first it’s a blast.  You’re using a big paint brush; You’re following your body’s rhythm; You’re painting! So much color, so much beauty.  It’s everything you thought it would be.   Until…

It gets messy.  It’s ugly.  Somehow the exhilaration you were feeling has become frustration.  “How do I get back to it looking good?  I don’t like messy..I don’t like brown…I think I’m going to start over…is that ok?”

It’s natural to want to start over, but here’s the rub.  You want more than a pretty picture;  and ACCEPTANCE OF YOUR PAINTING AT THIS STAGE IS WHAT WILL OPEN THE DOOR TO NEW POSSIBILITIES.

There’s something about the creative process that requires you to go further than your inner critic; there’s so much possibility if you simply keep going.

Some years ago my husband and I had a successful ceramics business; In the process of making scores of teapots, bowls, vases, etc he found that there were just certain pieces he  fell in love with early.  It may have been the way the light was filtering in the window as he began a particular vase or perhaps his inspired new idea for glazing a bowl.

It’s Going To Be Perfect

He couldn’t wait until the piece had been fired, glazed and fired again—complete! But often during another part of the pottery making process something happened that he hadn’t intended or didn’t like and was troubled by:  He had to decide what to do.

One time in particular he had hand pinched a beautiful bowl and was in the process of glazing it.  As he began glazing the rim of the bowl, he dropped the bowl into the glaze bucket, quickly picked it up and quietly watched a substantial glob of glaze travel around and down the bowl, drip and all.

He had plans for this bowl.  He knew what he wanted.  He saw it.  And this was not it.  Definitely an “Oh Shit!” moment.  Now what to do? Wipe off all the glaze since he made a mistake or keep going, allowing it to go through the firing as is?

Yep..he let it be.  And when it came out of the kiln he was amazed. Completely unintended, imperfect, incorrect, and HE LOVED IT. It was beautiful to him.  This bowl became the inspiration for a whole new line of bowls.

In your painting process, as you hit that moment of “this isn’t what I wanted this to look like” and you’re ready to grab a 4 inch brush and paint everything white:

Your inner critic has a job to do and this is it—to keep you in your smallness, your box, to keep you from anything risky, to keep you controlled and groomed.  You are not trying to change the inner critic; you simply don’t want to get stopped by it.  There is a big difference here.

If You Look Again, You’ll Find Something To Say Yes To

Find something that you like and continue to paint, one stroke at a time, moving forward in your process, not backwards.

It’s not necessarily what you thought it would be, but it might be the creativity you were looking for in the first place! As you continue to add more and more paint, you will notice something unexpected showing up, something you couldn’t have imagined before you started.

You are building the capacity to paint regardless of what your inner critic says.  You will get to know “ugly” and “don’t like” as steps along the way of the creative journey, nothing more. You will be surprised at what you can do and what you paint!